The People (God bless ‘em) have spoken and they’ve said the logo without the crests is the best. When Scent of Decay is ready to go, it’ll have the new logo on the front cover. It’ll also have a new header to replace the “cluster of arrows” design. As I mentioned in a previous blog, the arrows were too much like the one used by Franco fascists, so obviously I’d like to avoid the connection. ;-) The new one has five stars instead of arrows (see the logo on this blog). I can only guess what neo-nazi group probably uses that on their flag . . .

Using the new cover logo, I also tried messing around with a redesign of the Imperium website. Eventually, however, I decided that the logo took up too much screen space so I went with a flatter version. In fact, I published the new site yesterday and I’m happy with the results. The starry background and the new artwork on the main page give the site a more “sci-fi” feel. However, the new design broke the story pages (Alexander the Prince and Magnus Black). I spent a large chunk of today trying to fix it. For the most part, everything is fine now.

Part of the reason I’ve been working on the website is because I was procrastinating on Scent of Decay. I was at the part when the characters first meet the Nanomancer and he gives a little speech. It’s the classic Nemesis monologue, though it’s pretty brief. I’ve been struggling with it for a few days because I couldn’t think what he would say. Is it possible I’m not evil enough? (The Wife says “No.”) Anyway, eventually I jotted down something which I think will work. Hopefully it’s not too cheesy, because that’s certainly my strong point.
Posted by Unknown at 5:06 PM No comments:

I’ve been chugging away at Scent of Decay (oh, I rhymed!) this week, including a rewrite of the climax. I think the new one is more dramatic and introduces a nemesis character that I hope players will enjoy. I haven’t written too much about this on the blog because I didn’t want to give anything away. However, I’m about to change that:

The climax of the module revolves around Jon Fletcher (a brilliant scientist) and his work on self-replicating nanos. He’s been doing secret experiments to reanimate dead bodies using nanites to effectively take over for the corpse’s failed systems (brain, lungs, and heart, etc.). When Fletcher’s fiancée dies, he has her body stolen so he can try to bring her back to life. After injecting her with the nanos, he makes the mistake of kissing her on the lips which then transfers some of the nanos into his own system. The nanites then start self-replicating and eventually take over his body (since the little machines don’t realize Fletcher isn’t a corpse). At this point, Fletcher ceases to exist; replaced by a new being calling itself the Nanomancer. This new creature inherits all of the ambitions and intellect of Jon Fletcher, along with several million nanos surging through its body. Most of all, the Nanomancer wants to survive and, like any self-respecting self-aware entity, it thinks that taking over the world is a good place to start. Obviously the players will have to stop this from happening, and prevent their characters from getting infected with nanos in the process.

So, in a nutshell, that’s what I’ve been working on lately with the new module. I think it’s coming together pretty well so far. Btw, here’s a picture I did of both Barbara Bennett after being re-animated, and Jon Fletcher after he turned into the Nanomancer: 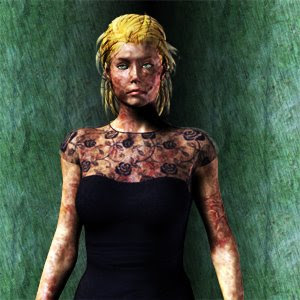 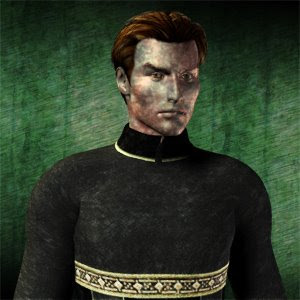 Posted by Unknown at 4:22 PM No comments:

It’s funny how much writing I got done on Scent of Decay in the first few weeks of working on it, and how little writing I’ve done over the last couple of weeks. On the bright side I’ve gotten several sections done recently so at least I’m making progress. Scent of Decay is now over 20 pages and will probably reach almost 30 by the time I’m done.

While I was working on the adventure module, I’ve also had a couple of side projects going. One is called Landscapes and it’s basically another paper miniatures product: this time 3D terrain. I’ve also worked on what I’m calling Paper Citizens II: Friends and Foes. Along with the 3-sided miniatures included in the original Paper Citizens supplement, I’m including A-frame and tokens in the new one. The tokens are probably my favorite because I can zoom in a little more on the image to give greater detail.

Perhaps most exciting (at least for me) is a new logo I’ve been designing. Originally, I created the first Imperium Chronicles logo to be simple and, dare I say, “elegant.” Well, I achieved the former but not the latter, so I’ve been trying to design a new one that looks better. A few days ago inspiration took hold and I created a round logo with the crests of the five families on it. After some feedback, however, I designed a second version without the crests. Not knowing which version would be more popular, I posted both on an RPG forum and put it to a vote. So far, the non-crest version seems to be winning, but we’ll see over the next few days how the vote goes (hopefully without the need for a re-count). Here are the two versions (click for a larger view): 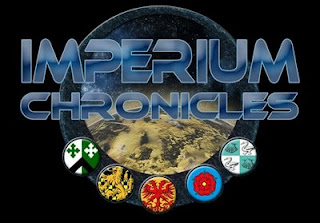 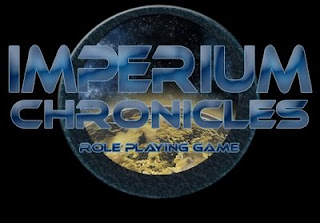 Posted by Unknown at 2:18 PM No comments:

Seriously, how has it been another week already?? I feel bad that I haven’t updated my blog more, but then I’m also updating the Facebook fan page so that’s something. Btw, if you haven’t joined it yet, please click on the Facebook icon on the right and join the Imperium Chronicles fan page. It’s hard to explain how much I appreciate people showing an interest in my game. It really helps keep me motivated. Also, the Wife has a cattle prod . . .

Besides writing, I’ve been busy with more renders. Below are two logos: one for the SuTech Corporation and the other for the Dancing Jackal nightclub (click to get the bigger image). The first one turned out well, but I’m still on the fence about the Dancing Jackal. It’s supposed to be for a nightclub so it had to be a bit more “frilly” that I’d prefer. To me it looks too much like a gay bar (not that there’s anything wrong with it).

I also did these two Ghul images. The one on the left was my first attempt, but ultimately I decided not to use it. The arm and hand look odd, although I thought the face came out well (especially the teeth). I decided to use the second render instead. It’s a different model and texture than the first attempt and I think it’s a lot of more successful. 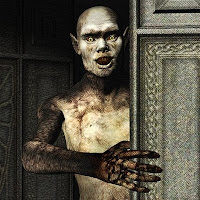 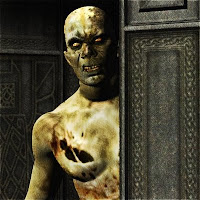 Posted by Unknown at 3:58 PM No comments: