To Bite or Not to Bite

Perhaps it’s fitting that on a dark and dreary day I’ve been thinking more about the Dökk. I wrote this quick blurb: “Some view the Dökk as only myth, but seasoned starfarers know that the black ships of the Shadow Fleet are all too real.” I picture them appearing without warning out of the abyss of space to attack vessels, and then disappearing again before help can arrive. I would like there to be some mystery about them, such as where they come from and their relation to the Dahl race. I thought about perhaps Dahl explorers who got cut off from the rest of their people and devolved into something sinister.

As you can see from the render in my previous post (and the new one below), they have vampire-like teeth. I don’t want the Dökk to be actual vampires (i.e.: undead), but I like the idea of them needing to drink blood. Instead of living underground (which is typical of dark elves in literature and games), my Dökk would live predominately in space, either in their ships or on a hidden space station (orbiting a dead planet). It’s a fact that animals that live without much sunlight have trouble producing red blood cells (and hemoglobin). Perhaps that’s why the Dökk would need to attack ships -- to feed on new victims.

I also picture them has using stealth a lot (including their ships). They would be adept at attacking from hiding (in space and on land), and then escaping. Due to their lack of hemoglobin, they would tend to be weaker than even their Dahl brethren, so they would need to pick their battles well to avoid injury or death.

Again, these are the thoughts I’m having (although I may want to turn on my Daylight lamp before I sink my teeth into the Wife’s neck). ;-) 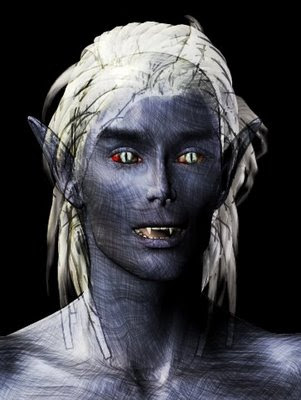 Posted by Unknown at 3:11 PM No comments:

I noticed yesterday that Daz3d.com was having a sale on some of 3d models I’ve been eyeing (here and here), so I snapped them up. Since I’m currently unemployed, I’d been hesitant to spend much money, but the deal was too good to pass up!

I wanted the model s because I can use them for both the Vogar and the Akiak races in my game. Although the previous model s were okay, I felt they needed an upgrade. The new ones give me a lot more variety, and they look pretty badass (much like myself):

Today I did the render below of a new minor race for my game. Based on the Dark Elves/Drow of fantasy fiction, my version is called the Dökk (based on the Old Norse word Dökkálfar, meaning "dark elf"). This is actually one of several minor races I’d like to include in the supplement after the current one I’m working on. It’ll have new creatures, races, and NPCs (essentially an expansion of Chapter 6 of the Basic Rules). Of course, I’m not done with the Deck Plans supplement yet, but it never hurts to plan ahead. ;-) 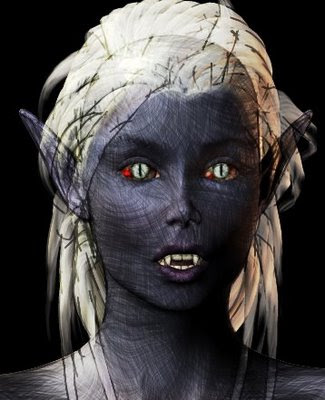 Sorry it’s been awhile. I had to wait until the Wife recovered from proofreading my last post. She’d fallen into a boredom coma and had a “do not resuscitate” clause. I’m hopeful this time I can be more entertaining. ;-)

The deck plans supplement is going well. I’m at least halfway done, if not more. The last few days I’ve been doing artwork, and I’ve been experimenting with a new style. Basically, I’m using the sketch render functionality in Poser 7, and mixing that with a regular render. I’m still debating whether this new style is any better (or worse) than a regular render. However, since a recent review was badmouthing my wicked art skillz, I’ve been obsessing about it. Here are some samples. Please comment on what you think of them, but remember any tomatoes you throw will be hitting your own monitor: 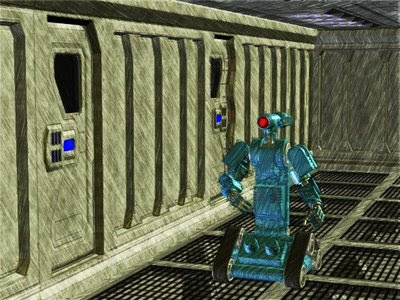 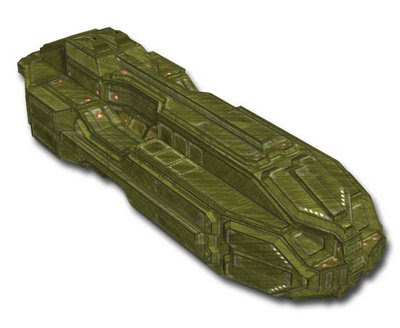 Method to the Madness

The deck plans continue to go well, although I’ve run into issues with some of them. Usually this is solved by just walking away for a while or taking a nap. Since walking away sounds too much like exercise, I prefer the napping strategy.

I thought I’d talk about how I create each plan. It’s pretty dry stuff, but someone might find it useful. FYI, I got the original idea from Section IV of this article written by Randy Tyler.

First, using the volumes of each component, I create boxes in Photoshop. In the image, I have a grid of squares so each box will be consistently sized.

Next, I start arranging the different component boxes in the general shape of the ship. To figure out exactly what the ship will be shaped as, I usually take the top-down silhouette of a vaguely ship-shaped object. (For example, the Lembu Cargo Barge plans are actually in the shape of a grav car (page 93, Basic Rules) that I’ve turned 180 degrees.) I can then take that shape and shrink or enlarge it to fit all the different components.

After making a rough arrangement of the components, I start drawing in the bulkheads and other interior walls. At this time, I also include other compartments like airlocks, storage areas, etc. Then I add hatches and doorways.

Finally, to make the plans more visually pleasing, I add color to the major components, using a consistent color scheme. For example, avionics (computers, radars, and comm systems) are green, while thrusters and drives are orange.

So that’s the basic method I use. It actually goes very quickly once you do it a couple of times. I’ve been able to complete about one deck plan per day this way.

Speaking of the Lembu, here’s what it currently looks like. Keep in mind that it’s a cargo barge, so most of the hull is empty inside (for all the cargo containers): 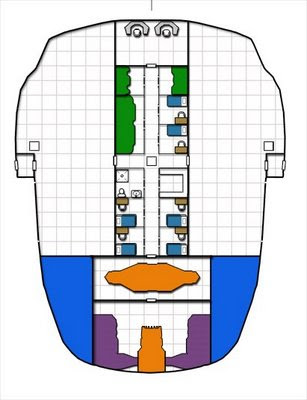 Posted by Unknown at 5:52 PM No comments:

I put the Imperium Grab Bag on DriveThruRPG a few days ago and it’s been “selling” like hot cakes. Who knew that giving away free stuff would be so popular? It’s a good way to create awareness about my game, but only if people actually buy my game as a result. Right now that’s still an open question.

The deck plans I’ve been working on lately are going very well. I’ve completed three so far (Rapier Class Fighter, Ballista Class Missile Boat, and a Rambler Class Freighter) and I’m currently working on a fourth: Daemon Class Merchant Raider (all from Chapter 8 of the Basic Rules). So far, the deck plans have been pretty symmetrical, but I’d really like to throw in one or two asymmetrical ones just to irritate people like my Wife whose Germanic heritage rails against anything without right angles.

Here’s one of the deck plans (the Missile Boat): 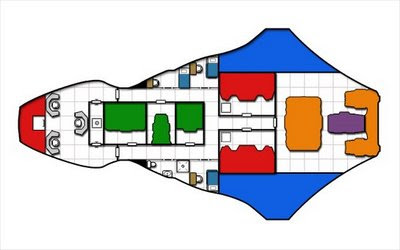 In the review I mentioned in the last post, the writer commented on one of the problems that goes with the 3e d20 rules: namely that high level characters have such high skill values that most rolls become a joke. With that in mind, I’ve been thinking about modifying the skill rules a little to help alleviate some of that problem. Instead of putting an unlimited number of ranks (although capped by the current XP level) into a particular skill, I’d like to divide each skill into five “tiers”, each worth a +2 modifier. Each tier would cost skill points (first tier equals one point, second tier costs two points, etc.) up to the fifth tier, which would act as a cap (giving the character a maximum of +10 for that skill). Also, characters could only buy one tier per XP level. In other words, after reaching a new XP level, the player could only buy the next tier for a skill (not multiple tiers). Anyway, it’s just an idea for now, but I’m looking at ways I can improve the game moving forward.
Posted by Unknown at 3:53 PM No comments:

The Grab Bag is Now Open!

I published the Imperial Grab Bag and announced it on several sites. There’s nothing like giving things away for free to attract a crowd (just ask Paris Hilton -- No he didn’t!). Ahem, yes, well I’ve had quite a few people came to the main site and even to this lowly blog/news page. With that in mind, I will try to keep my usual foul language to a minimum (daggumit!).

Now that the Grag Bag is out there, I’m working on another supplement about starship construction. When I wrote the Starship chapter in the Basic Rules, I wanted to make a system that would allow GMs and players to create new ships quickly, without bogging them down with too many restrictions. I did this by using the concept of “slots” for each hull size. Shipwrights could then just plug in the components they wanted based on their sizes. I’m pretty proud of the system, but it’s not really designed to take into account exact volumes (which are required if you want to create deck plans). So, I’ve been busy assigning sizes (in standard 1.5 meter squares) for each component. I completed that a few days ago and since then, I’ve been drawing deck plans to see how well the sizes work. For the most part I’ve been happy with the results. In short, the method in the Basic Rules still stands, but this new supplement will act as a loose guideline. Btw, I’m undecided whether I’ll try selling this new supplement or give it away for free like the Grab Bag.

So, I was reading a review about my game recently and it said that it was hard to put Imperium Chronicles into a particular genre. It said there was a mixture of hard and soft sci-fi, cyberpunk, and even fantasy elements to my game. While the review seemed to suggest this was a bad thing, or at least “diluting” the overall game, I don’t agree. Perhaps it’s because I’m a very eclectic person (i.e.: I love both ABBA and Metallica equally), but I purposely mixed genres when I was writing the game. I love to mix and match and include whatever catches my eye. I can definitely see why some would not like this, but for me, it gives a richer experience, not a weaker one.
Posted by Unknown at 3:00 PM No comments: