Actually, just my day job, not Imperium Chronicles. I told them to “take this job and shove it” on Monday and I’m pretty happy about it. While I take some time off from the rat race, I plan to focus more on Destination: Rochan. To that end, today I created the bare bones of what will be the actual sourcebook document. Before I just had my notes and sections of text (on Google Docs), but today I started the Word document in which all that content will eventually appear. No, I don’t have anything fancy like QuarkXPress or InDesign, although through Wikipedia, I just found out about an open source program called Scribus, which I should probably investigate. In the meantime, I’m just using Word in all its mediocre greatness. ;-)

For the document, I needed a cover graphic, so I spent much of the morning working on that. As you can see below, it has the planet plus some nebulous-looking clouds. Originally there was a different star field, but I wasn’t happy with how it looked. Also, since the main star for the Rochan system is very large and very close to the planet, I was playing around with including it as well. However, it dominated the picture too much, taking focus away from the planet, so I dropped that idea. 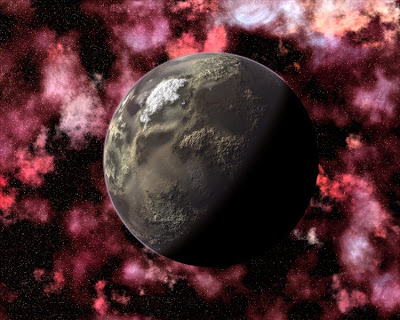 Lastly, I’ve been trying to drum up traffic by emailing other RPG bloggers and seeing if they wanted to exchange links on our respective blogrolls. I’ve also applied for inclusion on the RPG Bloggers site. I sent complimentary copies of the Chronicles to the writers on the site, so I’m hoping I can be included there.
Posted by Unknown at 3:23 PM 1 comment:

I’d like to take this opportunity to ask people who have bought my game (or who simply have questions about it) to let me know what you think of it. Please post a comment here or, if you’d prefer to email, drop me a line at feedback@imperiumonline.com. At this point, about the only comments I’ve gotten are a few reviews (some that were positive and others that weren’t). I’m really interested in hearing what you all have to say. Actually, if you just want to say “hi,” that’s okay too. So lonely . . . ;-)

Here’s a partial map of Zakros (just showing the city). Each square is about 30 meters and the water to the East is the Undersea (although most of it is cut off in this image): 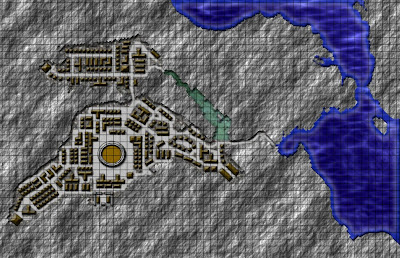 And, just for fun, I did a mosaic of a Tor Elder. I’m not sure it looks all that good, but I thought I’d show it off anyway: 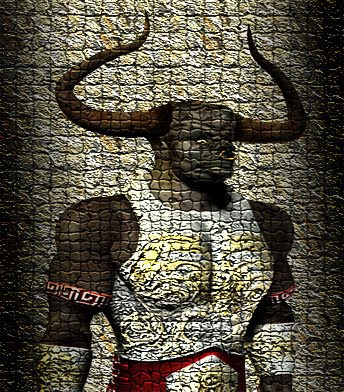 Don't Ask Your Wife Whether You're an Idiot

As most of you know, I’m a proponent for spending a lot of time creating content and then deciding not to use it. I do this, as most of you also know and the Wife can confirm, because I’m an IDIOT!! Case in point: I created a map for Zakros. Only after doing so did I realize that it’s entirely too small to be a city. Although I could still use the map by somehow turning it into something else, after realizing my mistake the map became dead to me. To a somewhat lesser extent, I also spent a lot of time working on a map for the Undersea, but since it wasn’t really part of either the Klixians or the Tor, it felt extraneous and I decided not to use it. However, in this case I didn’t throw it away completely. I decided to take the Undersea map and fill in half of it with land and use that space for Zakros. The rest of the map will remain an underground sea (albeit half its original size). This allowed me to create a city that was believably sized while also using the Undersea map. Of course, all of this meant doing a lot of additional work, which could’ve been avoided if I simply planned things better.

In other news, I created a new map called the Elders’ Sanctum. This is part of Zakros, but is much smaller than the original map I had created (but serves the same purpose, namely, the home of the Tor Elders).

Last week, I also worked on robots and creatures for the sourcebook. This included examples for the Tor, Klixian, and the Tagus Miners. Each one is actually a set of three different NPCs. In other words, for the Klixians, there’s the Worker, Warrior, and the Noble. For the Tagus Miners, there’s the Miner, Guard, and Foreman. Each has its own stats and level range.

What’s next? Well, I plan to create the Klixian diamond mine, which I’m currently calling Firedeep. Of course, I’ll probably make the entire map and then decide to abandon it, but that’s only because I’m an IDIOT!! ;-)
Posted by Unknown at 10:34 AM No comments:

A cold rain’s-a-fallin’ outside, but at least I’m working from home today. The company where I work laid off half their staff on Friday, but I’m still employed for now. Also, my sister got laid off from her job yesterday. Gotta love the holiday season!

I’m more or less done with the map for Rochan. I added the last few regional names, using a middle-eastern theme (or the Holy Land as my father would call it). Why this theme? Well, I decided on the name Edom for the star (a red giant) that Rochan revolves around. Edom was the twin brother of Jacob in the Old Testament, but the name is also Hebrew for red. So, while I was finding names for regions of Rochan, I kept up the biblical theme. In fact, if you go to the wiki link above, you’ll see two words (Negev and Shasu) on the page, both of which I used for names on my map. I’m nothing if not lazy . . .

Here’s the map as it stands now. Of course, I might shift things around later:

I also downloaded the model for the Klixians and did a few practice renders. The textures for the model are a bit dark and problematic in places. There’s some dappled light on the textures which is very distracting. I can turn it off in most spots so that’s not too bad, but for some of the renders, I found it difficult to make out surface features. Overall though, I think I can make it work. Here’s what I did so far: 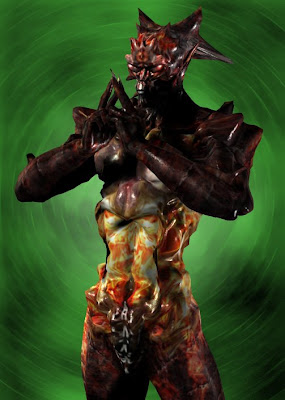 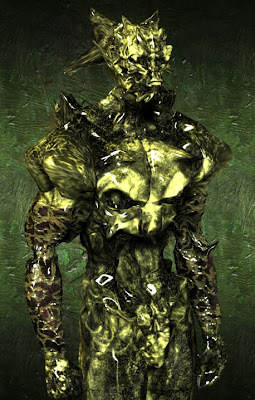 Posted by Unknown at 2:46 PM No comments:

I’ve been surprisingly productive lately. I say surprising because I’m really quite lazy by nature. However, over the last few days I’ve completed the main layout of the underground Tor city (called Zakros), created the logo for Tagus Mines, and did a couple more renders of Tor warriors.

For the Tor city, I’ve been struggling with what Zakros should look like. I’m not sure how I came up with it, but I started thinking of concentric circles. That evolved into three concentric squares with the edges consisting of long hallways. As you travel from the outer halls into the inner halls, you actually travel deeper underground. Here’s a composite view that shows the three rings together. For the actual sourcebook, however, each ring will be shown separately on its own map: 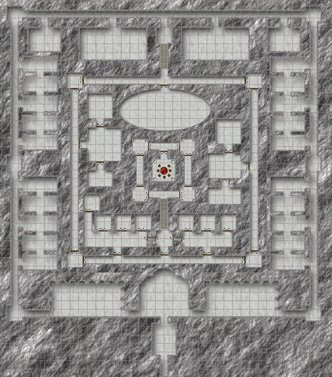 The Tagus Mines logo was something I’ve been thinking about for a while. Yesterday I took those ideas and created the logo in Photoshop. I wanted it to look like something a company would actually use, including a tag line (in the usual horrible marketing style). Although my wife pointed out that the logo looked like a letter T wearing a blazer, I decided to keep it. In fact, if I ever create a hammerhead shark super hero, I may use the logo for that too. ;-)

Lastly, I did a couple more Tor renders, using some clothing I bought from Daz3d.com. As you can see, they look Romanesque or Greek. Since I’ve based a lot of the Tor society on the Minoan culture, I wanted their dress to follow the same theme. My wife suggested that they actually look like they’re wearing dresses, but I insisted those are tunics. She remains unconvinced. 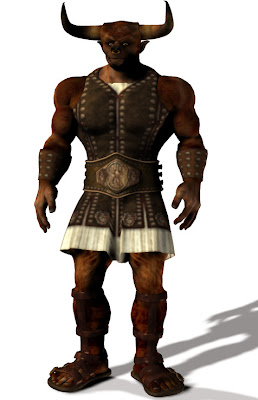 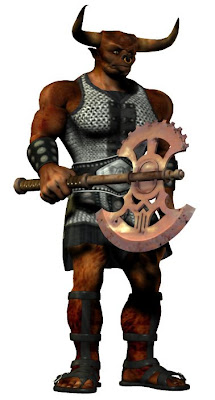 Posted by Unknown at 1:17 PM No comments:

Can we get on with our lives now?

Having said that, I should point out that Imperium Chronicles is full of politics (at least where factions are concerned). Each group is out to better their position, often at the expense of other groups. Many are, in fact, diametrically opposed. Why did I include this in the game? Mostly it’s because a good game, like a good story, needs conflict: a protagonist versus an antagonist. Also, I think it’s human nature to dislike each other, especially those who are in any way different than ourselves. Even if two people looked exactly alike and came from similar backgrounds in similar places, you can bet there’d be something that they’d dislike about each other. It’s why human history is full of fighting. Peace is not in our repertoire.

But enough about politics . . . did I mention how much I hate it?

I’ve written yet more on the Lions’ Den (the main camp of Tagus Mines on Rochan). One of the influences for this sourcebook has been the ’81 movie Outland starring Sean Connery. I saw it in the theatre as a kid and I’ve seen it a few times on TV since. I’ve always been struck by the cramped living conditions of the miners in the film and how they turned to drugs and prostitutes to cope. Since the miners on Rochan live entirely underground, almost never seeing the sky, their lives are very much like the ones in Outland. To that end, I’ve also included an underground shanty town in my sourcebook, full of all the vices one would expect on the frontier. This includes a large brothel called Digger’s Delight. This is run by an all-women crime syndicate called the Red Lotus (which I introduced in the Core Rule book). Ironically, the name Rochan is actually a hindu name meaning “red lotus”.