I’m happy to announce that Imperium Chronicles is now available on the Your Games Now website. For the last year, my game could only be bought on DriveThruRPG/RPGNow.com (and its affiliates). Starting this week, however, my empire is growing a little bit bigger. Of course, if YGN could make their vendor application a little more idiot proof, it would make my life (as the before mentioned idiot) a lot easier.

Home Worlds is approaching the home stretch. I’ve pretty much added all the content that’s going in there and now I just need to do some finishing touches and have the Editor read through it for grievous typos. In my mind, I guess I’ve already moved on to the next project, but I still haven’t decided what that’ll be.

I was thinking about Lilliputians the other day. Well, technically I was thinking about a race of tiny humanoids living inside robots. Since I was a kid, even before watching Dr. Who (i.e. Daleks) and certainly before seeing Men in Black (i.e. the Arquillian living inside the corpse at the morgue), I’ve been fascinated about creatures living inside machines. Then I started thinking about the machines themselves and I was reminded of the Mechs in the Gundam series. I asked myself: “What if the people in Gundam were actually very small and their “gigantic” mechs were really human-size? So, I came up with the idea of a race of small creatures (maybe 15 cm tall) that interact with other races by walking around in machines. Basically, the Mechs allow the race (who I’m calling Parvulians, based on the Latin word for small) to interact with other races without fear of being stepped on or tucked away into someone’s pocket. My wife even suggested making them extremely boastful (like most tiny men you encounter). ;-)

Btw, here's an image from Home Worlds. It's a Dark Psi psionic that turns your hands into the claws of a bear: 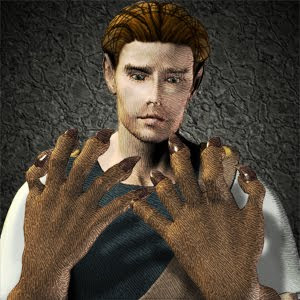 Posted by Unknown at 2:40 PM No comments:

The creative juices are flowing again (ewwww), so I came up with two new ideas. The first is a supplement I’m calling Weapons of War that features new weapons, weapon modification rules, and military vehicles (including grav and hover tanks). I’ve been thinking about the mod rules and some new weapons of destruction, but it’s only been recently that I considered adding tanks to the game. For the tanks, I think I’ll be using the same basic “slot” mechanic that I’ve used for robots and starships. I don’t want to go too overboard with them, however, so there’s probably only going to be three sets of chassis (light, medium, and heavy) and three sets of turrets (small, medium, and large). It’s early days, though, so we’ll have to see.

The Home Worlds module is also coming along. I’m working on the second half right now, which covers Dark Psionics. Right now there’s 26 new psionics that characters can choose from, mostly divided into two categories: metamorphism and so-called Death Magic. I’m hoping these new psionics will satisfy my players’ need for a darker side of the mind. ;-)
Posted by Unknown at 5:29 PM No comments:

The final home world I’m working on right now is called Septu VII and unlike the others that came before it, this one is shared by two of the major races: the feline Akiak and the canine Vogars. The planet, like its two main inhabitants, is a world of contrast: in the northern and southern latitudes, the climate is cold and snowy (kind of like the forests of Siberia). Along the equator, however, the weather is much hotter and desert-like. With that in mind, I envision the Vogars like the wolves of northern Russia and the Akiak like the ancient Egyptians (who actually worshipped cats). Since cats originally came from the desert, that also fits nicely.

Religiously, the Vogars have a shaman culture that values protective spirits called totems (similar to the Indians of the American Northwest). Each individual Vogar has his own guardian spirit, and each Vogar tribe/pack also has its own totem. All of the Vogars, however, have a supreme spirit called the Alpha Totem (like the alpha dog). This spirit protects the entire race.

Below is an image of Septu VII (click to enlarge) and the Vogar flag. The flag is split into two parts: the bottom white area represents the snow, including the footprint of a wolf. The upper part is black, representing the night sky, including the moon and a star: 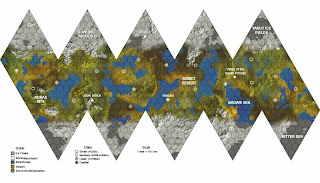 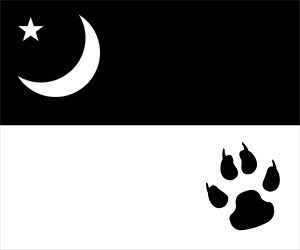 Posted by Unknown at 5:58 PM No comments: