Here's the second artwork I've done for Fighter Wing. This one is called Zorya Flight, which (naturally) shows a flight of Talion Zorya fighters in formation w/ one peeling off. 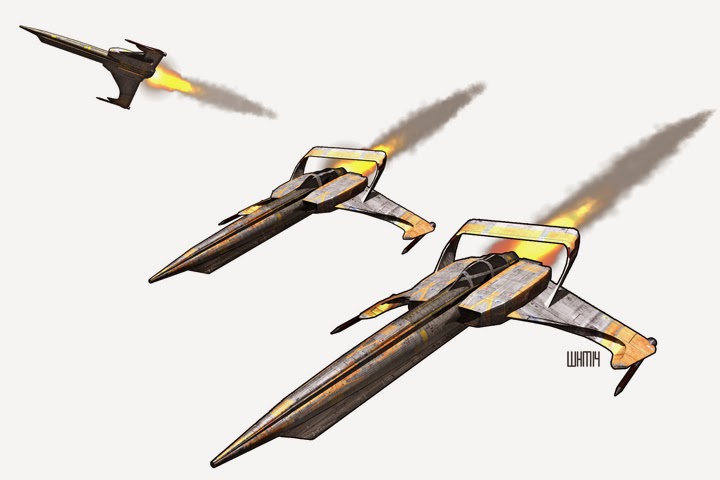 Posted by Unknown at 2:18 PM No comments:

I'm working on artwork for Fighter Wing while the rules are being proofread. This is the first one I've done so far, which I'm calling Topor in Trouble. It shows an Imperial Rapier fighter attacking a Magna Topor heavy fighter. 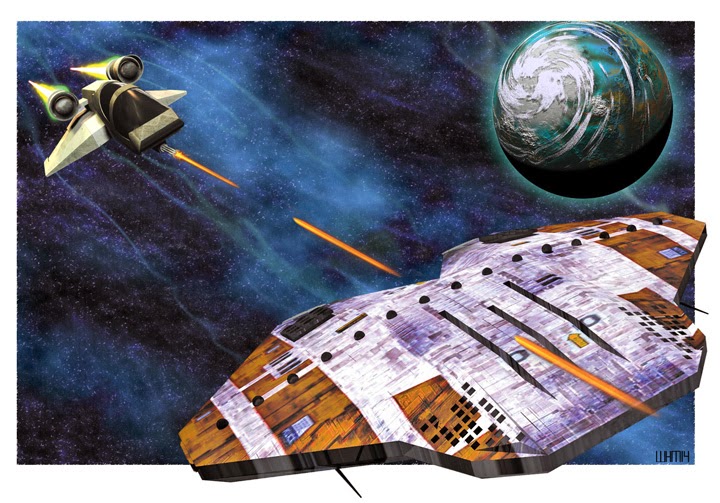 Posted by Unknown at 1:54 PM No comments:

Although I'd still like to work on the 2nd edition of the Imperium Chronicles RPG, I've also taken notes on an expansion for Fighter Wing (provided it sells decently). The expansion is tentatively called Fighter Wing: Planetary Defense Force and will, naturally, include new ships used by planets (not necessarily associated with the Imperial Navy). It'll also include two new factions:  Warlock Industries and the Celadon Pirates (Goblins).

As for new weapons, I'm looking at a new missile called an Aphid, designed more for anti-fighter duties instead of capital ships. Also, something I'm calling Rapid Pulse Plasma (RPP) that is more accurate than blasters, but with less range. Lastly, the pirates will have something called a Torpor Torpedo, a AoE weapon that emits a field that cancels a ships inertia (speed).

Again, I haven't published Fighter Wing yet, so we'll have to see how well that does before I work on an expansion...
Posted by Unknown at 2:36 PM No comments:

Here's a graphic I did today for Fighter Wing showing the different default maneuvers that ships can perform (and their Movement Point costs). 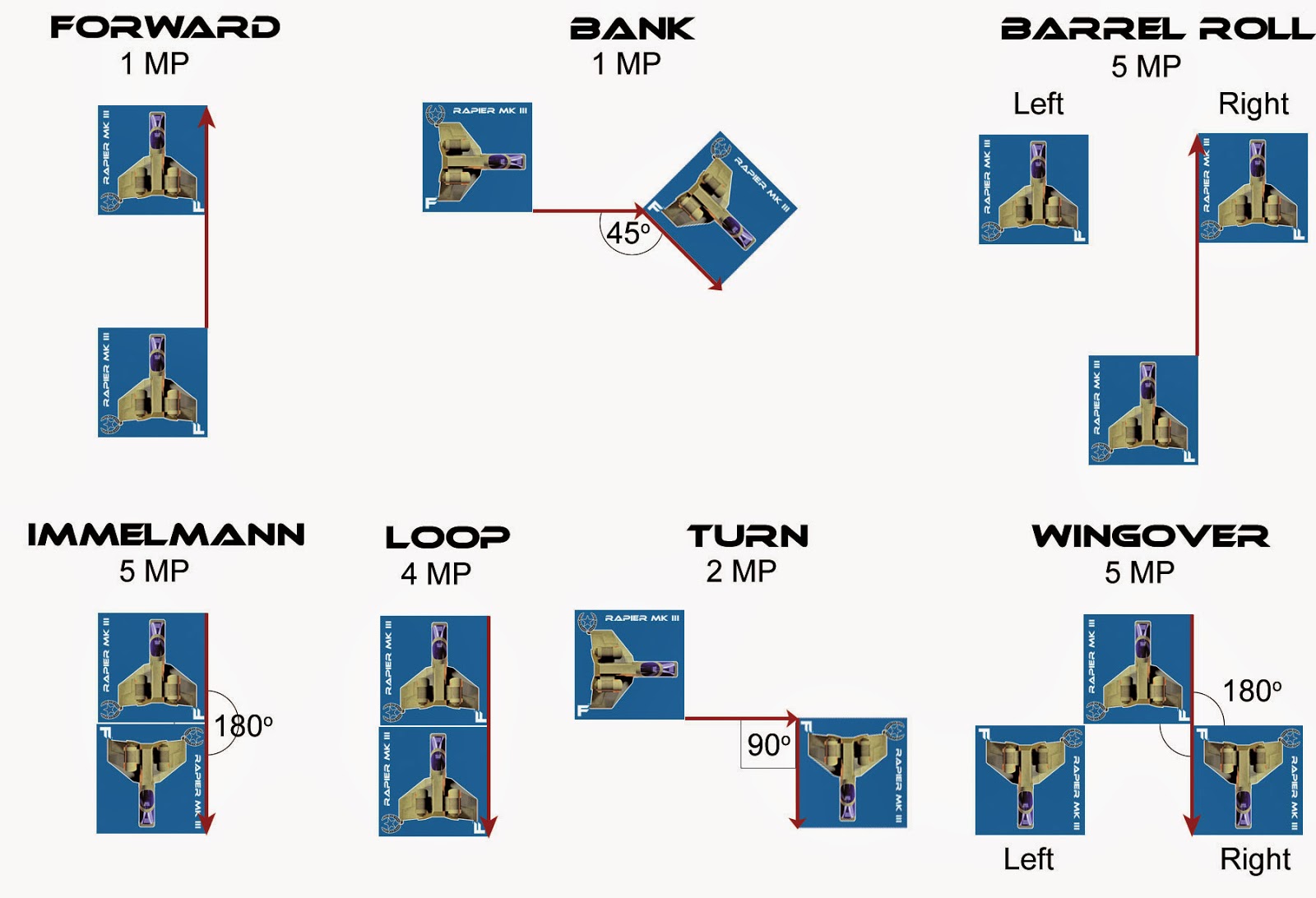 Posted by Unknown at 5:50 PM No comments:

I've completed the stat card sheets (7 total) for Fighter Wing. Each ship gets it's own stat card (some of which are double-sided). Players keep track of their ship's ammo and hit points via the cards by filling in the checkboxes on the cards. 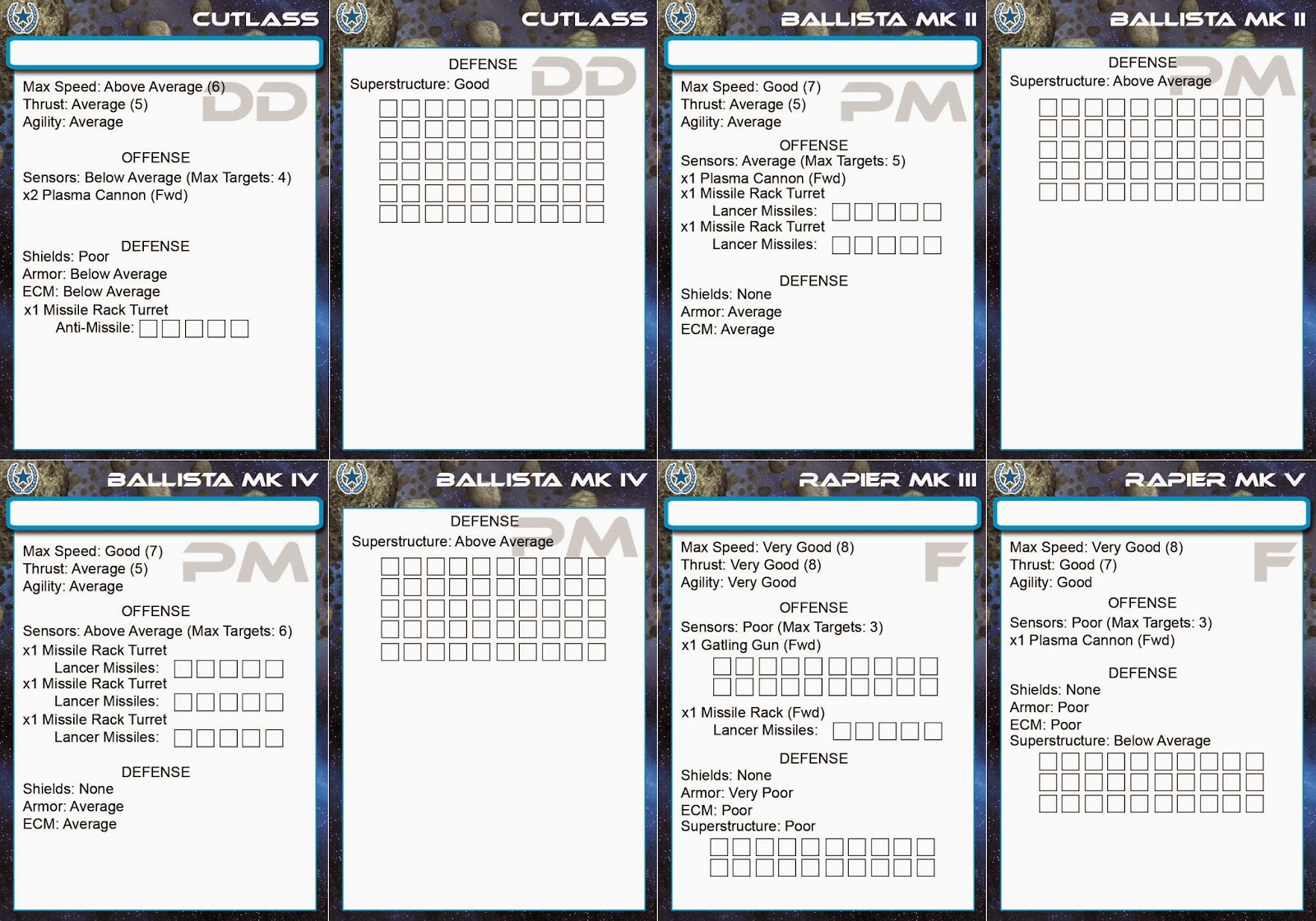 Posted by Unknown at 2:56 PM No comments:

I finally completed the Fighter Wing scenarios today (all 10 of them). It took quite a while because each includes all the forces involved plus alternate ships so they can be replayed multiple times. One of my goals for this game was to allow players to mix and match the different ships and model versions in each scenario. Add in the optional rule for pilot skills, and you should be able to replay each several times (not to mention make up your own).
Posted by Unknown at 3:35 PM No comments:

I'm making great progress on Fighter Wing, especially in the rules section. I still have more work to be done on the scenarios, but those are shaping up pretty well too.

I decided to add some additional information at the beginning of the game to give some context to the different factions that are fighting. New players may not have seen Fleets at War! or even the Imperium Chronicles RPG, so I need to set the stage a bit.
Posted by Unknown at 1:34 PM No comments:

Back in 2011 (see previous post) I stopped posting on my regular blog to focus on Facebook, but I'm going to start posting on my old blog again. Facebook has nobody to blame but themselves because they changed the algorithm that determines which posts are featured on people's feed, which has led to a lot of business pages losing the majority of their viewers.

Anyway, posting to my blog here will also post to my Google+ page (which I was doing anyway), so this will just make it all a little easier! :-)

Btw, I still plan on posting to my FB page as well, but this will give more options for my readers...

Posted by Unknown at 1:24 PM No comments: