I finished the NPC section of Monster Menagerie yesterday. It features five new NPCs, including a new character named Gelatinous Bob. I like Bob because he’s my homage to Jabba the Hutt, and he has a belly larger than mine (which is nice). As you can see from the render below, Bob’s a cross between a toad and god knows what else, with a little Buddha thrown in. He’s officially a bail bondsman, but he’s really a loan shark who lends money from “Bob’s Bank.” That last part is a reference to a Steve Martin routine I heard many, many years ago (although I could be remembering it wrong in which case it’s a reference to nothing at all).

I’m very happy with how Bob’s render came out. I actually did at least three separate renders, but the lighting looked all wrong. I then realized I could remove the roof of the dojo prop I was using, which made all the difference in the world. You can actually see the shadows from the rafters in the image below (after the roof was removed and the light could shine in). I enjoy using shadows a lot, perhaps due to the darkness recesses of my mind . . .

So, now that the NPC section is done, that leaves the Minor Races section (which is about 90% done) and the Creatures and New Skills/Ability sections (50% and 25% done respectively). It’s important that I try publishing new stuff every 2-3 months so I can maintain visibility (and continue earning income). If things continue the way they are now, Menagerie should “hit the shelves” in another month. 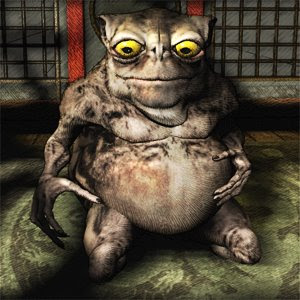 Posted by Unknown at 3:05 PM No comments:

I’ve added four of the five minor races to Monster Menagerie over the last few days, including the Tor and Klixians from the Destination: Rochan sourcebook. I have no plans to go back to writing the sourcebook, actually, but I will use those materials elsewhere. In fact, all of the creatures and races from Destination: Rochan are going into Menagerie. As for the Tor and the Klixians, I’ve changed them a little from the sourcebook. The Klixians, for example, are now a xenophobic race of anal retentive insects bent on purifying the universe of all those other “filthy” races -- beware of an insectoid carrying a dust pan and a plasma rifle.

By the way, I’ve also decided to change the name of the Drazil (the “Lizardmen”). I never liked the name in the first place, perhaps because it reminded me too much of Dweezil Zappa. So, I played around with the letters (which spell out Lizard) and came up with Z’radil, which I like better. Also, you can tell it’s an alien race because of the apostrophe. ;-)

So I got a very nice email from a customer. He was having trouble using a coupon I sent out (due to my stupidity), so I sent him a new coupon that would actually work. He replied that “It is certainly uncommon in this day and age to receive such a high degree of attentiveness over something that most people would consider a trivial.” This really made me feel good, because, believe it or not, I don’t get a lot of feedback from my customer base. I really work hard to create quality products for people, so it’s nice to hear back from them from time to time.

Anyway, here are two new renders of the Tor (included in the new supplement) for viewing enjoyment: 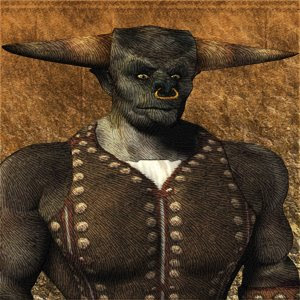 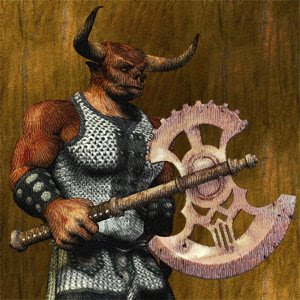 Posted by Unknown at 1:06 PM No comments:

I hope everybody had a good Valentine’s Day. I gave the Wife a blue Ninja bobblehead (which may or may not be a colorful euphemism). The rest of the weekend, however, was nothing but an exercise in frustration, starting with Friday the 13th [insert ominous music here]. Basically, I was having a lot of trouble with Poser crashing or freezing up. Friday, I only got two renders done, and the second one (see female below) took me most of the day. I couldn’t get the textures to work first, and then once I got that done, Poser froze up. It took until the evening before I got an image I could use.

Then, on Sunday, I got some work done in Word, which was fine, but when I tried to do more renders, Poser crapped up again. To add insult to injury, this afternoon, I checked that final render and realized I had stupidly done it at the wrong resolution, so I had to do it yet AGAIN. Gaarrrrrr . . .

So, I did what any normal person would do: I went back to bed.

However, after getting up, I redid the render (which I’m calling Captain Ramsey) and it seemed to work okay. I’m just hoping the rest of the week won’t suck as much as the last few days.

Anyway, the following renders are 1) Magnus Black and 2) Sylvia Flax (both appeared in my Magnus Black short story). And 3) Captain Ramsey, who appeared in the Prologue of my graphic novel Alexander the Prince. All three will be featured as NPCs in the Monster Menagerie supplement: 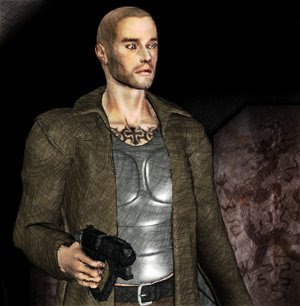 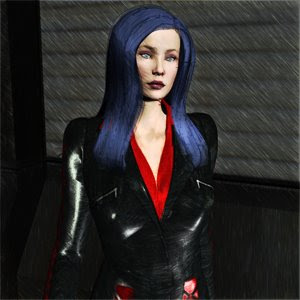 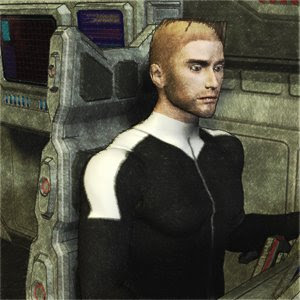 Since Deck Plans went live on Friday, I’ve been very happy with the sales so far. It looks to me that even people who haven’t bought the Basic Rules are buying the supplement. I guess the sample deck plans I included are generic enough that people can use them in whatever sci-fi campaign they’re running. With that in mind, I sent an email to everybody who tried my free Imperium Grab Bag and told them about the new supplement. I’m hoping some of them will want to buy it.

The first image below is the render I did this morning. It’s one of the Drazil (or “Lizardmen”), a reptilian minor race. They work as mercenaries for crime syndicates and megacorporations. They have a bad reputation, especially for their habit of eating parts of a prisoner while interrogating him. As for the render, I’m fairly happy with how it came out, although the Wife didn’t like it as much (“Go do your own renders, Lady!”).

The other render is the Dökk boss, which I’m calling a Blood Prince. Each group of Dökk is called a Brood, and each brood is led by a Blood Prince. I did three different renders of the prince before I got one that I liked. The finished render has a definite Dracula vibe, though the Dökk are not actually vampires. Blood sucking is more of a hobby . . . 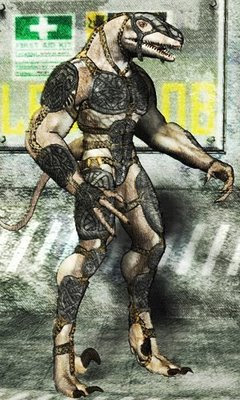 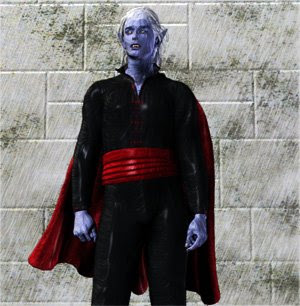 Posted by Unknown at 4:19 PM No comments:

Friday, my first Imperium Chronicles supplement, Deck Plans, went on sale! Coincidentally, I got the print version in the mail that day too, so I made that available also. The print one looks pretty good, although I’m not very happy with how much Lulu.com charges for full color. Since the deck plans wouldn’t look very good in black & white, I felt compelled to offer the supplement in color (for the print version that is). However, due to the printing costs, it’s almost prohibitively expensive to buy. On the other hand, the downloaded version is fairly short (24 pages), so I think plenty of people will be able to simply print it out on their own color printers.

Today I’ve been rendering like crazy. I got several new 3D models so I’ve been creating images for the creatures they represent. One of them (see below) is a new minor race called the Lutin. They are also called Hobgoblins due to their green skin and nasty demeanor. Basically, the Lutins are slave traders who smuggle slaves across the border into Magna territory. They also take them to planets within the Imperium that are too poor to buy robots (the de facto slaves of the Empire). They are pretty bad guys, so I’m hoping players will enjoy fighting them. ;-)

The other image below is a Siren. The Siren creature is grotesque, but (like the story from the Odyssey) sings a song that charms men into believing she’s beautiful (even without beer goggles).

Here are two sample images. The first is the Lutin (Hobgoblin) and the other is the Siren: 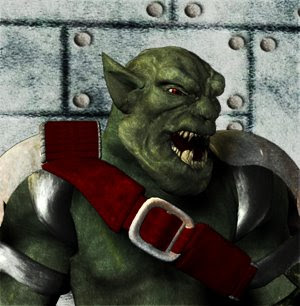 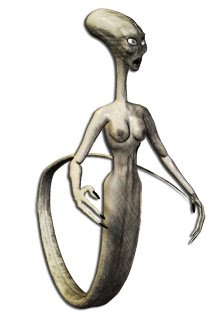 Posted by Unknown at 2:58 PM No comments:

The Deck Plans supplement is just about done. Actually, it is done, but I’m waiting until this weekend to release it since Saturday is a high volume day on DriveThruRPG/RPGNow. Just one of the things I’ve learned since joining the capitalist elite. I’m also offering a print version, but I’m waiting until I get the sample copy in the mail before I make it available (just to make sure it looks okay).

Now that the Deck Plans are done, I’ve turned my attention to my next project, which I’m calling Monster Menagerie. My goal is to include 30-40 new creatures, 3-4 new minor races, and some NPCs. I may also include some factions too, perhaps the ones I featured in the Grab Bag.

Btw, I’ve also been thinking about an adventure featuring the Dökk, which I’m calling The Crimson Kiss. I sketched out a few details for the adventure, but I’m not sure when I’ll be working on it . . . 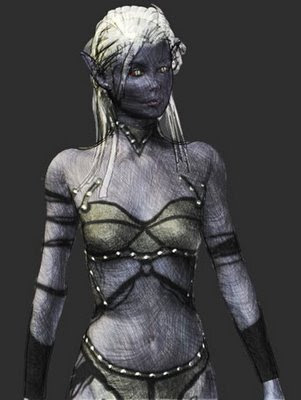 Posted by Unknown at 3:24 PM No comments: